by Julie Jensen
Directed by Tracy Callahan
Performances April 17 – May 02, 2015 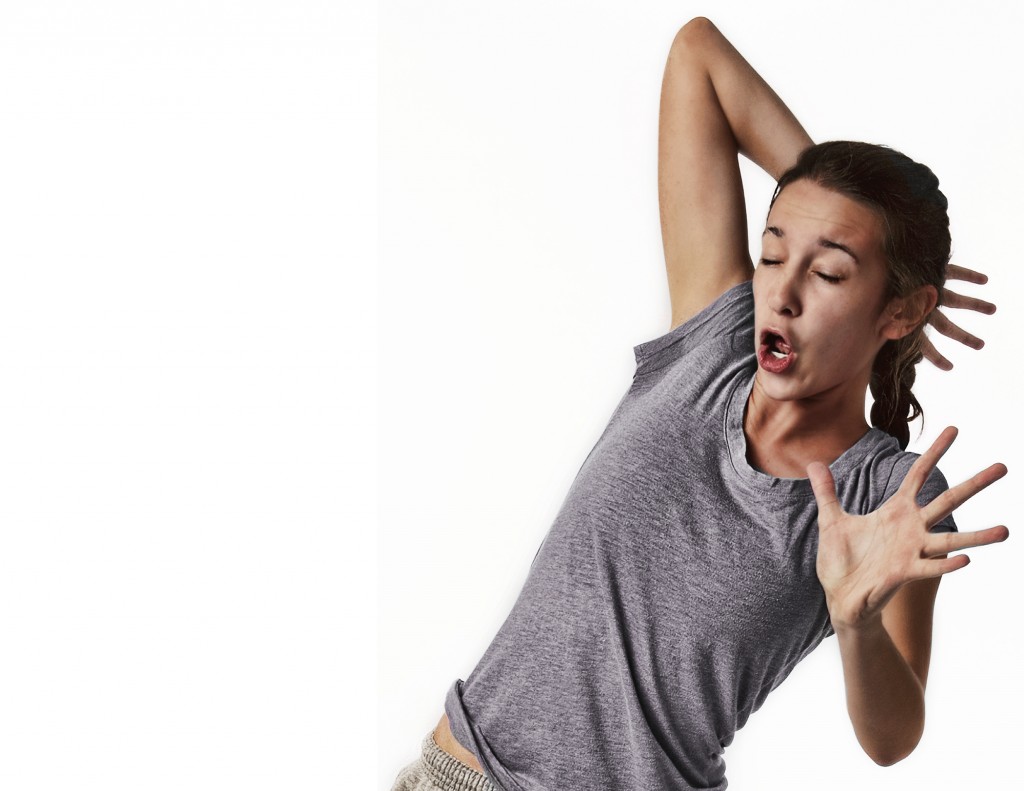 Caitlin sees the world in black and white. Colors are messy, and recess is terrifying. Loud noise is dangerous, so are kids in groups. She’s so smart she can recite definitions from the dictionary, but she’s high maintenance. The world is not an easy place for her. She struggles with a world that doesn’t fit her definitions, but in the process she comes to understand the value of colors and how to walk in someone else’s shoes. Although kids in groups will always be scary, the trick is not to shake or spin. Mockingbird, an adaptation by Julie Jensen of the National Book Award winning novel by Katherine Erskine, just finished an extraordinary run at Kennedy Center in Washington, D.C. where Tracy Callahan also directed a “brilliant, moving, luminous production.”

Camrey Bagley – Caitlin
Mockingbird is Camrey’s first show with Pygmalion Theatre Company, but this is her second time playing this role. She loves this show and the character of Caitlin so much that she couldn’t keep herself away. Other roles that Camrey has enjoyed include Peggy in Father of the Bride, Elizabeth Fezziwig in A Christmas Carol, Sprintze in Fiddler on the Roof (Hale Centre Theatre). She is a Musical Theatre Major at Weber State University and was recently seen as Sister in Damn Yankees. She is so thankful for the opportunity to work with this incredible cast and hopes that you can enjoy this show as much as we have enjoyed being a part of it.

Betsy West – Mrs. Johnson
Betsy West was last seen onstage in Motherhood Out Loud (Pygmalion Theater Co.).  Other recent credits include Mrs. Webb in Our Town (The Grand Theatre) and Dr. Gertie Ladenburger in 33 Variations (Silver Summit Theatre).  Favorite roles include M’Lynn in Steel Magnolias (Pinnacle Acting Co.), and Jessie Mae in The Trip to Bountiful, Agnes in I Do!  I Do!, and Mother Superior in Nunsense (The Grand Theatre).  Betsy was fortunate to play the role of Susan in the one-woman show My Left Breast (Plan-B Theatre Company).  In her acting career, Betsy has had the honor of performing at Pioneer Theatre Company, Sundance Summer Theater, and the Salt Lake Acting Company, as well as numerous commercials, voice-overs, and industrials.  She has a BFA from the University of Utah.

Tamara Howell – Mrs. Brooks
Tamara is thrilled to be a part of this moving piece. Recently, she was seen in The 12 Dates of Christmas, Seven and The Good Body (Pygmalion Theatre Co.). Other recent roles include Truvy in Steel Magnolias and Rona Lisa Perrett in The 25th Annual Putnam County Spelling Bee (Pinnacle Acting Co.), Steffy in I Oughta Be in Pictures (Utah Theatre Artists), Noleta Netercott in Sordid Lives, Lou in Welcome Home Jenny Sutter and Zoila in Living Out (Pygmalion). Tamara earned her BFA in theatre from the University of Utah.

Austin Archer – Michael & Ensemble
This will be Austin’s first appearance with Pygmalion Theatre Company. Recently Austin has been seen on stage as Prentiss in Peter and the Starcatcher, as Leaf Coneybear in the 25th Annual Putnam County Spelling Bee, as Pfc. Louden Downey in A Few Good Men and the play by play series reading of Mr.Wheeler’s as Ed (Pioneer Theatre Company). Five seasons of Saturday’s Voyeur and three seasons of the children’s theatre series, also Haemon in Too Much Memory and James Monroe in Bloody, Bloody Andrew Jackson (Salt Lake Acting Co.).  This will mark his third time setting movement in a show for director Tracy Callahan. “Always a pleasure, T. Thanks for bringing me along for the ride again. And thanks to my friends and family for all of your love and support!”

Tyson Baker – Josh & Ensemble
Tyson is excited to be making his Pygmalion Theatre Company debut with Mockingbird.  Past credits include Hannay in The 39 Steps, Jidder & MC in Musical of Musicals, and Marcus Lycus in A Funny Thing Happened On the Way to the Forum (Old Lyric Rep.), Dan in Closer (Wasatch Theatre Co.), touring Different=Amazing, an anti-bullying kid’s show (Plan-B Theatre Co. ), Reverend Hale in The Crucible (Grand Theatre), Friar Lawrence in Romeo & Juliet (Weber State University), and Kid Shelleen, Gunfighter Extraordinaire in The Ballad of Cat Ballou (Jackson Hole Playhouse).  You can see him this fall in Plan-B’s new kids touring show Ruff! and in December for Booksmart, a dark comedy about working a 9-5 bookstore job during the holidays.  Thanks to Pygmalion for the opportunity, Tracy for letting me work with her again, and you, the audience, for coming to see this play!

Jacob Barnes – Ensemble
Mockingbird is Jacob’s first production with Pygmalion Theatre Company. Other credits include Spencer in The Waiters (Good Company Theater); Charles Bingley in Pride and Prejudice, The Nutcracker in The Nutcracker, Jonathan Harker in Dracula (Salty Dinner Theater); Dad in The Sandbox, President Prexy in The Cradle Will Rock, Rosencrantz in Rosencrantz and Guildenstern Are Dead (Weber State University.)  Jacob studies theatre at Weber State University.  He is excited and grateful to be working with such an incredible cast and crew. Jacob would like to thank his friends and family, especially Mom and Dad, for their endless love and support.

Haley McCormick – Ensemble
Haley McCormick has recently been seen as Poppy in Noises Off (Grand Theatre), Wendy in The Righteous and Very Real Housewives of Utah County (Alligator Press Productions), and Cate in Blasted (Luna Theatre Co.). She is a graduate of The University of the Arts in Philadelphia and is excited for this powerful production. Thank you to her parents and her husband Andy.

Tracy Callahan – Director
Tracy is a founding member of The Process Theatre Company. Directing credits there include Closer and The Dutchman. Tracy has directed Venus in Fur, Manning Up, Course 86B in the Catalogue, Six Years, How I Learned to Drive, and Mere Mortals for Salt Lake Acting Company. She is a freelance director and actor in the Salt Lake Area. Tracy is the Head of the Acting and Directing Program at Weber State University where she has directed over 35 productions. Some of her favorite educational productions include; Charm, Under Construction, The Laramie Project, Romeo and Juliet, As You Like It, Road, Six Degrees of Separation and The Birthday Party. Three of her productions have been selected to be presented at the Kennedy Center for the Performing Arts in Washington DC and several others have been invited to various regional theatre festivals. Tracy has been working with playwright Julie Jensen on Mockingbird for the past year with productions at Weber State and the Kennedy Center for the Performing Arts Theatre for Young Audiences.

Julie Jensen – Playwright
PYGmalion Productions Presents Julie Jensen, author of thirty plays, is the recipient of the Kennedy Center Award for New American Plays, the Joseph Jefferson Award for Best New Work, and the LA Weekly Award for Best New Play. She has received the McKnight National Playwriting Fellowship, the TCG/NEA Playwriting Residency, and a major grant from the Pew Charitable Trusts. Her work is published by Dramatic Publishing, DPS, and Playscripts, and is anthologized in Best Plays by Women and in a dozen other collections. Playwriting: Brief and Brilliant is published by Smith and Kraus. Mockingbird was produced at Kennedy Center’s Theatre for Young Audiences in DC in January and has won the Mark David Cohen Playwriting Award. This is the third play of hers to be produced by Pygmalion Theatre.

Thomas George – Scenic Design
Thomas is an Adjunct Professor of Theatre at the University of Utah. He holds an MFA from U.C. San Diego, and a BFA from the University of Utah. His previous designs for PYGmalion Productions include Motherhood Outloud and Spark. Guest designs for the U of U include A Flea In Her Ear, The Adding Machine, and Reasons To Be Pretty. Other notable productions include Hamlet for the Brooklyn Gallery Players, You Are Here at the Gene Frankel Theatre in New York, The New Voices Playwrights Festival for the New School of Drama, The Misanthrope at the Mandel Weiss Forum Theatre, and As You Like It for the Potiker Theatre at UC San Diego.

Jesse Portillo - Lighting Designer
Jesse Portillo is always happy to work with Pygmalion Theatre, where previous credits include In the Next Room, Lady Day at Emerson’s Bar & Grill, and Welcome Home, Jenny Sutter. Recent credits include The Little Dog Laughed at Millikin University, Turandot for Mobile Opera, Dido and Aeneas for Baylor University Opera, and Gypsy and Avenue Q  for LOOK Musical Theater. Local credits include productions with Plan-B Theatre, Pioneer Theatre, Salt Lake Acting Company, Egyptian Theatre, and the Grand Theatre. Jesse received an MFA in Lighting Design from Indiana University, and is on the faculty of the University of Utah Department of Theatre where he teaches courses in Lighting Design.

Jennie Pett – Rehearsal Stage Manager
Jennie has always been an avid theatre go-er, but has only recently started to worked behind the scenes. She madee her first foray into stage management with Pygmalion last year on Motherhood Out Loud. Jennie is thrilled to be part of creating a compelling & beautiful performances.