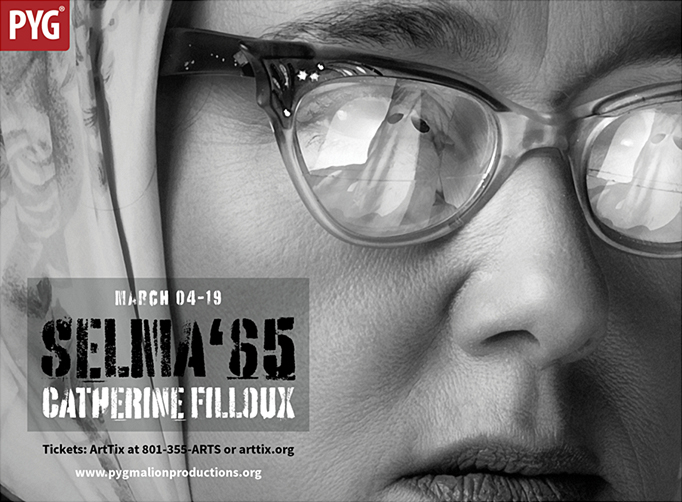 Friday, March 4
Meet our friends from  the NAACP Salt Lake Branch before the show and learn more about this vital organization during a short presentation following the performance. The National Association for the Advancement of Colored People (NAACP) Salt Lake Branch was formed in 1919 to combat discrimination in local schools. Nationally, the NAACP works to ensure the political, educational, social, and economic equality and rights of all persons and to eliminate race-based discrimination.

Saturday, March 12
Join us for a conversation with Selma ’65 playwright Catherine Filloux and author of The Informant Gary May. We’ll dive deeper into the history of Viola Liuzzo and Tommy Rowe, investigating how their stories converged during the historic Selma Voting Rights March.

Friday, March 18
Meet our friends from  the ACLU of Utah before the show and learn more about this vital organization during a short presentation following the performance. The ACLU of Utah operates through public education, legal advocacy, litigation, and lobbying to ensure the constitutional rights and freedoms of everyone living in or visiting Utah.

Tracie Merrill-Wilson
Tracie is a transplant from back east who is grateful to have found a home in the SLC theatre community.  Previous PYG credits include Cheat and Stop Kiss. Other favorite local and regional works include: Rapture, Blister, Burn and Ice Glen at SLAC; Rings at The Grand Theatre;  Lady Macbeth, Di Esperienza and SLAM at Plan B; Dracula at PTC; Rare Bird at the U; The Rainmaker at Hale; Metamorphoses, To Kill a Mockingbirdand As You Like It at the Clarence Brown Theatre; La Bete and The Tempest at Theater at Monmouth; and three Shakespeare tours.  A member of AEA, she received her MFA from UT-Knoxville and a classical degree from Weber Douglas Academy in London.  Tracie also takes great pride in being involved in readings to develop new plays (call me!).  Thank you Lane and Pygmalion for this incredible opportunity.  Endless love to Scott, both of their families, and huge thanks to her Dad for hours spent running lines.

Lane has been in the Salt Lake theatre scene for nearly 20 years. He has worked with Pygmalion, Salt Lake Acting Company, Plan B, The Grand, Wasatch Theatre Company, Sundance Children’s Theatre, Pinnacle Acting Company,  and many others. Currently, Lane sits on the Board of 3 companies; Salt City Radio Players, of which he is also the founder, Silver Summit Theatre Company, and Pygmalion Theatre Company. With Pygmalion, Lane has directed Hellman v. McCarthy, A Night with the Family with Laurie Mecham, The Mysterious, Happy Life of Brown Bag, and Seven, which was nominated for a City Weekly Arty for Best Production. He has also performed in numerous shows with Pygmalion. Last spring, Lane had the honor to direct a reading of Concessions, by Brian Richard Mori, at Abingdon Theatre in New York City. He also recently directed Greater Tuna in the heart of Central Texas, at Vive Les Arts Theatre, in Killeen. From 2008 – 2010, Lane was the Artistic Director of Utah Theatre Artists Company, where he directed Burn This, The Turn of the Screw, I Ought To Be In Pictures, 2 Across, and others. Other favorite directing credits include Buried Child (Silver Summit Theatre), Chapter Two (Wasatch Theatre Company), The Sunshine Boys (Pinnacle Acting Company), and numerous live radio theatre pieces, as part of Salt City Radio Players and Utah Theatre Artists Company. Lane’s project following Selma ’65 is a tour of the live radio theatre production of The Thin Man, by Dashiell Hammett with Salt Lake City Radio Players. Much love and mad thanks to Tracie and Catherine.

Catherine Filloux is an award-winning playwright who has been writing about human rights and social justice for over twenty years. Filloux’s new play Kidnap Road was the headline for Planet Connections reading series in New York City and she was honored with the Planet Activist Award due to her long career as an activist artist in the theater community.  Recent productions include: Selma ‘65 which premiered at La MaMa in New York City; Luz at La MaMa and Looking for Lilith Theatre Company in Louisville, Kentucky. Other plays: Dog and Wolf (59E59 Theaters, New York City); Killing the Boss (Cherry Lane Theatre, New York City); Lemkin’s House (Rideau de Bruxelles, Brussels, Belgium; McGinn-Cazale Theatre, New York City; Kamerni Teatar 55, Sarajevo, Bosnia; and Roxy Art House, Edinburgh, Scotland); The Breach, with Tarell McCraney and Joe Sutton (Seattle Repertory Theatre and Southern Rep, New Orleans); The Beauty Inside (New Georges, New York City, co-produced with InterAct Theatre Co., Philadelphia); Eyes of the Heart (National Asian American Theatre Company, New York City); Silence of God (Contemporary American Theater Festival, Shepherdstown, W.V.); and Mary and Myra which will be part of PYGmalion’s 2016 – 2017 season (Contemporary American Theater Festival.) Catherine went on an overseas reading tour to Sudan and South Sudan organized by the University of Iowa’s International Writing Program; and her play The Beauty Inside was produced in Northern Iraq, in the Kurdish language, by ArtRole. She is the librettist for three produced operas, and has been commissioned by the Vienna State Opera to write the libretto for composer Olga Neuwirth’s new opera, Orlando, based on the novel by Virginia Woolf (2019).  Catherine is a co-founder of Theatre Without Borders and has served as a speaker for playwriting and human rights organizations around the world. She is thrilled to be having this production in Salt Lake City, the home of her brother Francis Filloux and his family, and she thanks Brian Richard Mori and Lane Richins.  www.catherinefilloux.com

Pilar I. (Lighting Designer)
Currently the Production Stage Manager and Technical Director for Repertory Dance Theatre, Pilar graduated from the University of Utah in 2003 and has worked the last 20 years across the Wasatch Front in virtually every venue and with every arts organization. Pilar is excited to be returning to PYGmalion Theater Company, having previously designed over a dozen productions with the company. Pilar is a Journeyman Member of IATSE-Local 99.

Thomas George – Scenic Design
Thomas is a former Adjunct Instructor of Theatre at the University of Utah. He holds an MFA from U.C. San Diego, and a BFA from the University of Utah. His work can be seen this season at Salt Lake Acting Company and Plan B Theatre Company, among others. His previous designs for PYGmalion Productions include Mockingbird, Hellman Vs. McCarthy, Motherhood Outloud and Spark. Guest designs for the University of Utah include A Flea In Her Ear, The Adding Machine, and Reasons To Be Pretty. Other notable productions include Hamlet for the Brooklyn Gallery Players, You Are Here at the Gene Frankel Theatre in New York, The New Voices Playwrights Festival for the New School of Drama, The Misanthrope at the Mandel Weiss Forum Theatre, and As You Like It for the Potiker Theatre at UC San Diego.