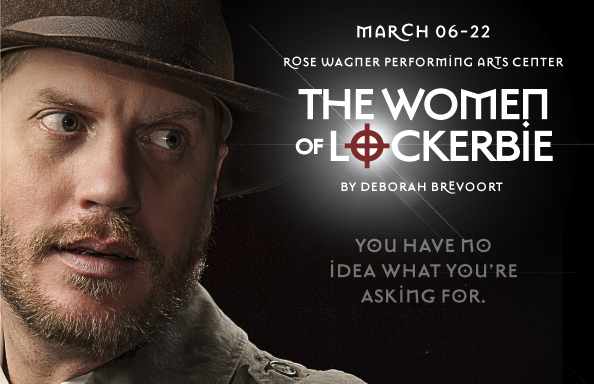 A mother from New Jersey roams the hills of Lockerbie Scotland, looking for her son’s remains, which were lost in the crash of Pan Am 103. She meets the Women of Lockerbie, who are fighting the US Government to obtain the clothing of the victims found in the plane’s wreckage in order to wash and return them to the victim’s families, and thereby convert an act of hatred into an act of love.

Dee-Dee Darby-Duffin – Madeline Livingston
Dee-Dee Darby-Duffin is thrilled to rejoin Pygmalion Theatre Company following her performance in 2012 as Billie Holliday in Lady Day at Emerson’s Bar & Grill.  These past few years as an actor have given her the opportunity to play some of the most formidable, enticing and amazing female characters and Madeline Livingston is no exception.  Dee-Dee past credits include The Third Crossing, winner of the 2012 Arty Award for Best Local Production (Plan B),For Colored Girls who Have Committed Suicide When The Rainbow Is Enuf (People Productions), Well (Pygmalion Theater Company), The Overwhelming, Saturdays Voyeur (Salt Lake Acting Company),  Messiah, Crowns, 1940’s Radio Hour, You Can’t Take it With You  (Grand Theater),  Hairspray, Civil War, Annie, Big River (Rodgers Memorial Theater), and Tsephange (Sundance Lab Workshop). Dee-Dee lives in Sugarhouse.

Kent Hadfield* – Bill Livingston
Kent was a member of Chautauqua Conservatory Theater Co. under the direction of Michael Kahn and Rebecca Guy. He is also a proud graduate of University of Utah’s Actor Training Program under the direction of Kenneth Washington. Kent has performed in Odd Couple, Diary of Anne Frank, 12 Angry Men (Pioneer Theater Company), DEAD MAN’S CELL PHONE (Wasatch Theater Company), Around the World in 80 Days (Meat & Potatoes Theater Company), An Inspector Calls, Cash on Delivery, Arsenic and Old Lace (Old Lyric Repertory Co.) and in several short films, promotional media, training videos and independent features.  “This is my first play for Pygmalion and I am truly honored to be a part of this production.” * Member of Actor’s Equity Association

Lane Richins –Mr. George Jones
Lane has been participating in theatre throughout Utah for more than a dozen years in various capacities. Lane has acted with several companies, including Pygmalion Theatre Company, Salt Lake Acting Company, Plan B, The Grand Theatre, Wasatch Theatre Company, and others.  Previous roles with Pygmalion include Wayne in Popcorn, Cuff in Cakewalk, Kip in Wonder of the World, Odell in Sordid Lives, and many others.  Currently, he sits on the board of Pygmalion Theatre Company.  Previously, as Artistic Director for Utah Theatre Artists Company, Lane directed the critical hits Burn This, The Turn of the Screw, I Ought to be in Pictures, and others.  More recently, Lane has directed The Sunshine Boys for Pinnacle Acting Company, Chapter Two for Wasatch Theatre Company, and Seven for Pygmalion Productions, which was nominated for the 2012 City Weekly Arty for Best Production.  He was also at the helm when The Mysterious, Happy Life of Brown Bag won Best Production and Best Play at the Wasatch Theatre Company Page-to-Stage festival, 2010.

Marylynn Alldredge Ehrengard – Greer
Marylynn is returning to Salt Lake City after a 4 year absence and is happy to join Pygmalion Theatre Company for the second time this season.  Past credits include Saturday’s Voyeur years 1997 & 1998, 2000, 2001, 2002 and 2008. Other Salt Lake Acting Company credits include Polly in Freedom Land, Geoffrey Dunderbread and Lady Lettuce in The Beard of Avon, and Macy in Cabbies, Cowboys and the tree of the Weeping Virgin. Marylynn also helped to develop the role of Vixen for Julie Jensen’s play Wait.  Marylynn has performed with the Park City Egyptian Theatre in The Wizard of Oz, How to Succeed in Business Without Really Trying, Jack and the Beanstock, and Everything I needed to Know I Learned in Kindergarten. Marylynn has also worked as a teacher with the YouTheatre Program in Park City. She has also worked with the Grand Theatre Company and toured schools throughout Utah playing Wiley in Wiley and the Hairy Man with Storybook Players. Other credits include Utah Shakespearian Festival’s A Funny Thing Happened on the way to the Forum, Othello and Henry the Eighth.  Marylynn studied at Southern Utah University and The New York Film Academy.

Daisy Blake Perry – Fiona
Daisy Blake loves working with other actors, rehearsing and being on stage but auditioning makes her super-anxious. Hence, her last full length play was Stop Kiss with Pygmalion Theatre Company in 2009. She returned to the stage for her fourth SLAM for Plan-B in 2013, and when she read The Women of Lockerbie she couldn’t resist auditioning. Daisy has been seen in Living Out and Popcorn (Pygmalion Theatre Company), Polish Joke, Hold Please and Big Love (Salt Lake Acting Company), Talking Wales One and Two(Utah Contemporary Theatre),  The Taming of the Shrew  (Salt Lake Shakespeare). She’s also had the pleasure of directing a piece in Student SLAM as well as co-directing the first Project Fabulocity with Tooth and Nail Theatre. Other work includes voicing Dandelion in the XBox 360 game Amped 3 as well as other video games, commercials and short films. Daisy has a drama degree from Bristol University in England and works at the Leonardo, while also running her own PR company. She will be Lythgoe Family Productions’ associate producer for Cinderella this Christmas at the Rose Wagner Center for the Performing Arts. Daisy has also worked as a theatre and arts writer for IN This Week and is a freelance writer for The Salt Lake Tribune. “For my wee ‘un Kent and Rich, whose clan was from Lockerbie.”

Vicki Pugmire – Hattie
This is Vicki’s 5th production with Pygmalion Theatre Company – that is, if you count Sordid Lives twice, which she does.  She recently finished a great run of The Foreigner at the Hale Centre Theatre where she did 28 performances in 31 days…phew.  Prior to that, Vicki performed in The Farndale McBeth (Meat and Potatoes Theatre Co.) and Antigone (Greek Theatre Festival). Some favorite roles of hers include Betty Meeks in The Foreigner, Elizabeth Proctor in The Crucible, Judith Bliss in Hayfever, Ouiser in Steel Magnolias and Sissy in Sordid Lives. Vicki hopes you will consider donating new and slightly used clothing to the YWCA, a worthy cause.

Stacey Rae Allen – Olive
This is Stacey’s debut with Pygmalion Theatre Company.. She has spent this year fulfilling a Teaching Residency in acting, voice and speech within the University of Utah’s Department of Theatre. Coaching credits include Avenue Q, Love Alone, Oedipus the King.  She was also an intern on Ragtime and A Midsummer’s Night Dream at the Regent’s Park Open Air Theatre in London.  In New York, Stacey teaches voice with The Kid’s Creative Collective. As an actor she has toured internationally with The LIDA Project, and worked with directors such as Alex Timbers, Ethan Heard, Lee Sunday Evans, Robin Wilks-Dunn and Sandra Shotwell.  Stacey holds an MA in Voice Studies (Royal Central School of Speech and Drama) and a BFA, Actor Training Program (University of Utah). Thank you to Fran Pruyn, Gage Williams, Sandra Shotwell & Sarah Shippobotham for your trust and confidence, and to my Salt Lake City family for making my time here possible.

Becca Dupaix – Stage Manager
Becca is thrilled to be working on her fifth season with Pygmalion Theater. Favorite projects with this incredible company include; Lady Day at Emerson’s Bar & Grill, In the Next Room (or the Vibrator Play), the Passion of Sister Dottie S. Dixion and a redesign of their website (check it out at PygmalionProductions.org). As a Weber State University graduate, Becca has had the pleasure of working with many Salt Lake theater companies including Dark Horse Theater, Pioneer Theater Company, New Works Theater Machine, and Pinnacle Acting Company. As the Development Coordinator for Tracy Aviary, a board member for Pygmalion and volunteer at many local non-profit organizations, Becca is always excited to help creativity flourish & give back to the Salt Lake community she loves.

John Wayne Cook – Scenic Designer
John works with the Utah Symphony/Opera Production Studios as their Shop manager and Scenic Artist. This is his fifth production with Pygmalion. From 1991-1995 John lived and workout at the Artspace Pierpont Project. During that time he designed many productions for Theater Works West. He is happy to be working with the Pygmalion Theater Company, a group of friends. He has been painting and designing since 1980. Starting at Promised Valley Playhouse he soon connected to Walk-Ons Inc., the Jackson Hole Playhouse, Stage Eleven Children’s Theater in Denver, Sundance Summer Theater, Lagoon, SLAC, the Walt Disney Co., Desert Star Playhouse, Pink Garter Theater, Tuacahn, Dancers’ Workshop, Off Square Theatre, Jackson Hole High School, and The National Oregon/California Trail Center in ontpelier, Idaho (John’s home town). This past year he has worked with RDT and Ballet West.

Jesse Portillo – Lighting Designer
Jesse Portillo is always happy to work with Pygmalion Theatre Company, where previous credits include In The Next Room, Lady Day at Emerson’s Bar and Grill, and Welcome Home, Jenny Sutter. Recent credits include The Little Dog Laughed (Millikin University), Turandot (Mobile Opera), Dido and Aeneas (Baylor University Opera), and Gypsy and Avenue Q (LOOK Musical Theater). Local credits include productions with Plan-B Theatre, Pioneer Theatre, Salt Lake Acting Company, Egyptian Theatre, and the Grand Theatre. Jesse received an MFA in Lighting Design from Indiana University, and is on the faculty of the University of Utah Department of Theatre where he teaches courses in Lighting Design.

Mikal Troy Klee – SoundScape Design
Since 1998 Troy has created SoundScapes for Pygmalion Theatre Company as resident sound designer. Troy is also on the Board of Directors for Silver Summit Theatre Company and recently designed the Set, Sound and Projections for their production of 33Variations as well as the logos for each of their productions. Troy has also worked with The Classical Greek Theatre Festival, Salt Lake Acting Company, The Hive Theatre Company, Wasatch Theatre Company, Dark Horse Company Theatre and Pinnacle Acting Company. Production designs include, Antigone, A Behanding In Spokane, The Passion of Sister Dottie S. Dixon, In The Next Room or The Vibrator Play, The Coming Ice Age, Six Degrees Of Separation, Dead Man’s Cell Phone, Dottie: The Sister Lives On, The Lion In Winter, In A Dark Dark House, True West, Popcorn, Sordid Lives, Stop Kiss, Steel Magnolias, Frozen, Dracula and Gypsy. While Troy has been doing theatre since he was nine years old, he is most proud to have been involved as a lighting and sound technician for the Opening and Closing Ceremonies of the 2002 Olympic and Paralympic Winter Games.