The Salt Lake Tribune writes about “If This Wall Could Talk’s” historical perspective on pandemics and protests. 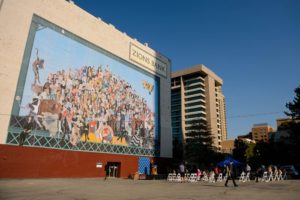 A recent Salt Lake Tribune article explains that Pygmalion Productions — a Salt Lake City-based theater company that focuses on issues, concerns and shared experiences in the lives of women — has brought some of the faces, including Brooks’ from the mural to life in a new program called “If This Wall Could Talk.”

Pygmalion’s artistic director, Fran Pruyn — who is also featured on the mural — said her team asked six women from the present day to reflect on what COVID-19 has taught them, and what they will take away after the pandemic.

They also recruited six local female playwrights and seven actors to create scenes for six historical Utah women, portraying “those women’s point of view on their hard times and on their truths,” as they relate today, Pruyn said.

“If this Wall Could Talk” was also chosen as a City Weekly essential pick for April 2021.  Read the City Weekly article here.